How Does an Ammonia Refrigeration System Work?

Home > Blog > How Does an Ammonia Refrigeration System Work?
Posted by Ryan Kuhlman on November 16, 2021 2:40 pm | Leave a Comment
Click to Expand

The cost-effectiveness and performance efficiency make ammonia refrigeration particularly advantageous for large cooling systems found in industrial applications. Ammonia refrigeration also offers the benefit of continually meeting strict refrigerant guidelines, as it is more environmentally friendly than synthetic refrigerant alternatives. Understanding the properties and advantages of ammonia refrigeration is very helpful in determining whether it may be a good option for your needs.
Ammonia has been used for refrigeration since the 1850s, and it’s still in use today because it’s safe, efficient, and cost-effective. Ammonia has a low boiling point and a high latent heat of vaporization, making it exceptional for cooling large areas efficiently. Though once used extensively in air conditioning systems, it is now the most common refrigerant for industrial applications. Ammonia is at work in refrigeration systems all around you: pharmaceutical labs and storage facilities, cheese and meat processing facilities, beverage companies, cold storage providers, ice skating rinks, and more.

Ammonia Refrigeration System: How It Works

Vapor-compression refrigeration systems all work the same way: multiple components work together to draw in warm air, remove the heat, and send the cool air into the space. Ammonia is so good at this because it’s able to absorb more energy than other chemicals as it changes from liquid to vapor, resulting in a system that is up to 10 percent more efficient than one that uses chlorofluorocarbons (CFCs) as a refrigerant.

Vapor-compression refrigeration systems are made of four primary components:

Additional components include heat exchangers, valves, thermostats, a receiver tank, and fans to direct the air.

Those components all play a key role in the ammonia refrigeration cycle:

Ammonia is still in use as a refrigerant today because it’s effective. It offers many advantages over CFCs and other types of systems: 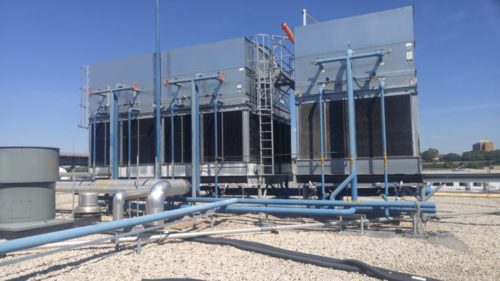 Read more about the benefits of ammonia, and debunk ammonia refrigeration myths that persist about this highly effective and efficient refrigerant.

For decades, Kuhlman Incorporated has specialized in turnkey industrial refrigeration solutions for a variety of industries, including food and beverage, storage and warehousing, and sports and recreation. From an ice cream freezer to an ice skating rink, our refrigeration solutions include custom design and installation, maintenance and repair, and optimization and retrofitting. Our highly experienced team can help with engineering and design, safety compliance, project estimates, on-site project management, system controls, 24-hour parts and service, and so much more. We work according to industry standards as outlined by OSHA, the National Pipe Welding Bureau, IIAR, RETA, ISNET, and other organizations. Lastly, we’re proud to be known for exceptional customer care and collaboration.

To learn more about our ammonia refrigeration systems and how we can help you with your next refrigeration project, contact us today. To discuss your system requirements with one of our team members, request a quote.